I’ve got a new idea for a painting, or a series of paintings: I want to create a modern battle scene in a bar. It’ll have the dynamic, swirling energy of Leonardo’s drawing and you’ll be able to distinguish the people brawling as the Right and the Left, given a few subtle clues like clothing, Make America Great Again hats, etc. It will be titled ‘The Allegory of Facebook.’
I’ve got the location settled; now I just need the models. Any takers in Portland??? I’ll buy you a drink! 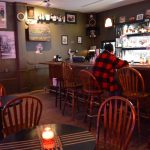 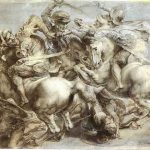