The Death of Marat, the Original Hipster

I’ve been thinking for a long time that the mirror over the mantel should be more than just a mirror reflecting the ceiling and it finally hits me this morning that it should be another murder scene painting, specifically ‘The Death of Marat’ by David. Since my memory of the French revolutionary figure is a little spotty, I look him up and find that he was the champion of the ‘sans-culottes’ movement, who were literally those ‘without culottes,’ or those silk shorts that the bourgeoisie wore. The sans-culottes used fashion as a revolutionary political statement and Marat was the original hipster. I’ve roughed in the bottom portion of the painting over the mantel, deliberately keeping it rough so that it looks more painterly. 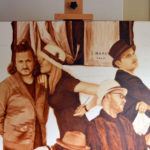